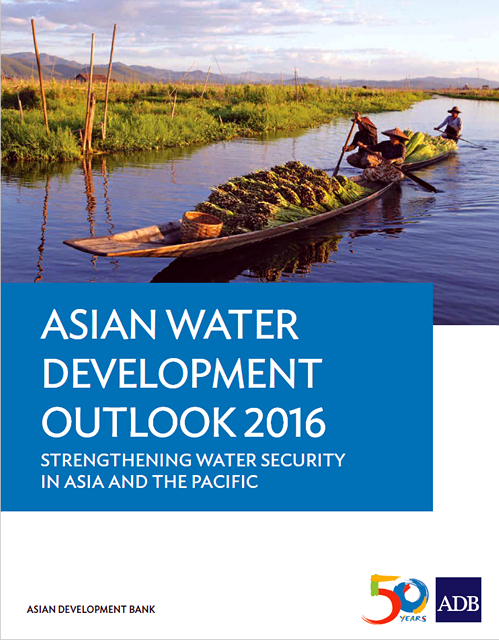 Executive Summary
The Asia and Pacific region has witnessed a remarkable transition in the past 2 decades.  From 1990 to 2012, more than 1 billion people in Asia and the Pacific were lifted out of extreme poverty. The region also witnessed rapid economic growth, which is expected to remain stable at a growth rate of about 5.7% for the next 2 years.
Despite these achievements, the region is a global hot spot for water insecurity. It remains home to 60% of the world’s population and half of the world’s poorest people. Water for agriculture continues to consume 80% of the region’s resources. A staggering 1.7 billion people lack access to basic sanitation, and with a predicted population of 5.2 billion by 2050 and hosting 22 megacities by 2030, the region’s finite water resources will be placed under enormous pressure. Recent estimates indicate up to 3.4 billion people could be living in water-stressed areas of Asia by 2050.1
Coupling demographics with changes in demand adds a further dimension. Industrialization and economic transformation require more power and a shift to more water-intensive diets, thus increasing competition between water users like industry and agriculture. The region’s water demand is projected to increase by about 55%, due to the growing needs for domestic water, manufacturing, and thermal electricity generation.2 Agriculture will need to produce 60% more food globally by 2050, and 100% more in developing countries, using diminishing water resources.
These challenges are compounded by increasing climate variability and water-related disasters that threaten numerous major urban areas, agricultural production, and coastal populations. Poor governance and weak institutional capacity endemic of almost all developing countries in Asia and the Pacific place sustained and inclusive economic development of the region into a very precarious situation.
Water remains pivotal for sustainable development and is linked to a number of global challenges. The advent of the post-2015 development agenda and a dedicated Sustainable Development Goal for water reflects this message and reemphasizes the interlinkages of this finite resource across a range of users.
Asia and the Pacific cannot sustain economic growth unless water is brought into the equation. A recent study by the Global Water Partnership and Organisation for Economic Co-operation and Development indicates that water insecurity costs the global economy about $500 billion annually with a total drag on the world economy of 1% or more of global gross domestic product.3 Meeting the socioeconomic challenges of the region will require us to go beyond infrastructure-centric solutions and economic growth projections that do not consider the status of water resources and service provision.